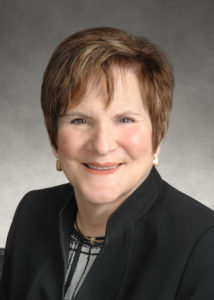 Ellen has been serving Kansas City’s communities for over 35 years, having held several executive positions in prominent local agencies. Most recently, Ellen served as Executive Director of the Jewish Heritage Foundation (JHF) from 2005-15 where she restructured JHF’s activities on enhancing support for local Jewish causes. Under her leadership, organizations including the Hyman Brand Hebrew Academy and Village Shalom attained financial stability and underwent long-range strategic planning that transformed their internal processes. Prior to her tenure at JHF, Ellen worked for the Jewish Community Center starting out as the Cultural Arts Director in 1984, then advancing to Program Director, Assistant Director and lastly as Executive Director from 1992-2004. In addition to a dynamic management approach, integrating the work of lay committees with staff, Ellen developed and implemented the fundraising for an enhanced outdoor waterpark, new playground for the Child Development Center, the initial Senior Adult kitchen and the Lewis and Shirley White Theater/Heritage Center wing.

Prior to coming to Kanas City, she served as the first Full Time Director of KU Hillel in Lawrence. During her four-year tenure, she secured funds and purchased the first Hillel House – a gathering place for Jewish Students – from 1983-2013.Ellen, a native New Yorker and an accomplished pianist, holds a B.A. from the State University of New York at Binghamton, an M.M. in Piano Performance from the University of North Carolina at Chapel Hill and an M.S. in post-secondary counseling from the University of Kansas. Ellen lives in Leawood with her husband, Stephen, an attorney.  They have two adult children and three grandchildren.