Fundraising during Election Season – How to Break through the Noise

By Suzanne DickenSeptember 23, 2020All Posts, Commentary, Fundraising, News You Can Use
No Comments 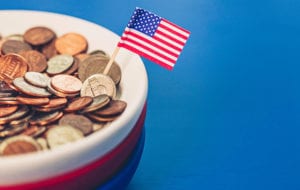 2020 political fundraising is already breaking records. As the pandemic continues and fuels a divisive political climate, nonprofits are wondering how to stay top of mind with their donors and compete with their political priorities this fall.

Although it may seem like political fundraising yields an enormous amount (which it does), it’s nothing compared to overall charitable giving. In fact, Americans give more than a billion dollars a day, on average, to help others.

But let’s look at the numbers. According to the Center for Responsive Politics, the cost of the 2016 federal election was at least $1.5 billion. Now, let’s analyze charitable giving in that same year. Giving USA: The Annual Report on Philanthropy, reports Americans gave an estimated $390.05 billion to charities in 2016. According to Giving USA 2020: The Annual Report on Philanthropy for the year 2019, Americans gave $449.64 billion to charity in 2019. As of August September 2020, candidates in the US Presidential election have raised $3.159 billion.

So what does this mean for you, the nonprofit professionals and fundraisers? The bottom line is, charitable giving is not negatively affected by an election, but election years do have an influence on fundraising.

Here is how you can make the most of an election year:

A report by The Blackbaud Institute found that politically active donors increased their charitable giving by 0.9%, while non-political donors decreased their donations by 2.1%. Likewise, DonorSearch conducted an analysis of $5 billion in known giving to 400 nonprofit organizations and discovered that political giving is another excellent predictor of future giving. In fact, an individual who has given at least $2,500 in his/her lifetime to federal political campaigns is 14 times more likely to give a philanthropic donation than someone who has not. Politically active times may motivate some donors, but not others. Do your research, ask open ended questions and be intentional in any major gift asks during an election cycle.

Take a Page from the Political Fundraising Strategy Book

One of the reasons political fundraising continues to skyrocket is the increasingly sophisticated methods utilized by their fundraisers. Strategies extend beyond traditional media to include social and digital platforms such as Instagram, Twitter and Facebook and a campaign staff of experts in a variety of fields to enhance donor targeting. A number of politicians raise significant funds through social media these days and continue to dominate the conversation through their savvy use of digital platforms. If more nonprofits could do the same, they could easily break through the noise of an election year to keep their donors and constituents engaged.

Position your organization to capitalize on the post-election momentum. After the 2016 election, the New York Times reported that many nonprofits opposed to President Trump’s policies saw an explosive surge in support right after the election. If your organization could be impacted by the outcome of the election, consider creating a communications strategy to capitalize on that post-election energy.

In conclusion, we are confident political giving won’t usurp charitable giving. However, nonprofit fundraisers have a lot to learn from political campaigns and will need to update their fundraising model to reflect our new reality, where politically motivated donations are going to impact the nonprofit sector. When we focus, plan, learn and implement with our eyes wide open, we can actually strengthen philanthropy.