Click here to see how nonprofits can utilize Giving USA to improve their fundraising.

Americans donated an estimated $358.38 billion to charity in 2014, surpassing the pre-recession benchmark year of 2007 ($355.17 billion in inflation-adjusted dollars.)  In addition, 2014 was the fifth year in a row of increased giving represented a 7.1 percent growth over the revised estimate of $339.94 billion given in 2013. These findings are contained in Giving USA 2015: The Annual Report on Philanthropy for the Year 2014.  Giving USA is the longest-running and most comprehensive evaluation of philanthropic trends in the United States. Giving USA is published by the Giving USA Foundation and is researched and written by the Indiana University Lilly Family School of Philanthropy.

“We are celebrating a banner year for philanthropy in 2015,” said Jeffrey D. Byrne, President + CEO of Jeffrey Byrne + Associates, Inc. “Giving is growing – not just returning to pre-recession levels, but beginning its uptick toward levels of philanthropy we have not seen before.” Byrne is also a Board member of the Giving Institute and serves as Vice Chair of the Executive Committee. “This special year marks the 80th Anniversary of the Giving Institute and the 60th Anniversary of the Giving USA Foundation, but even more importantly, reveals that the 2014 charitable giving total is the highest total in the 60-year history of the Giving USA report.”

In 2014, the American economy’s growth correlated to the surge in giving:  Gross Domestic Product (GDP), disposable personal income and the Standard & Poor’s 500 Index (S&P 500) all increased in 2014 as well.  One of the most important factors considered in measuring the status of a nation’s economic health, GDP increased 2.2 percent (in inflation-adjusted dollars) between 2013 and 2014.  In 2014, total giving as a percent of GDP was 2.1 percent. Total giving as a percentage of GDP has been at or slightly above 2.0 percent for the last three years. Disposable personal income, a key determinant in how much households give, increased 3.8 percent from 2013.  Research finds a statistically significant correlation between changes in total giving and the S&P 500, even though the S&P 500 generally sees more dramatic changes from year to year.  The S&P 500 increased 9.6 percent in inflation-adjusted dollars between 2013 and 2014.

“While this growth in giving is a tremendously good sign, nonprofits cannot rest on their laurels.  They must continue to develop strong cases for support to be shared with prospective donors.  And with an estimated 87 percent of total giving in 2014 coming from individuals, bequests and family foundations, it is more important than ever to remember philanthropy is about establishing and growing relationships,” added Byrne. 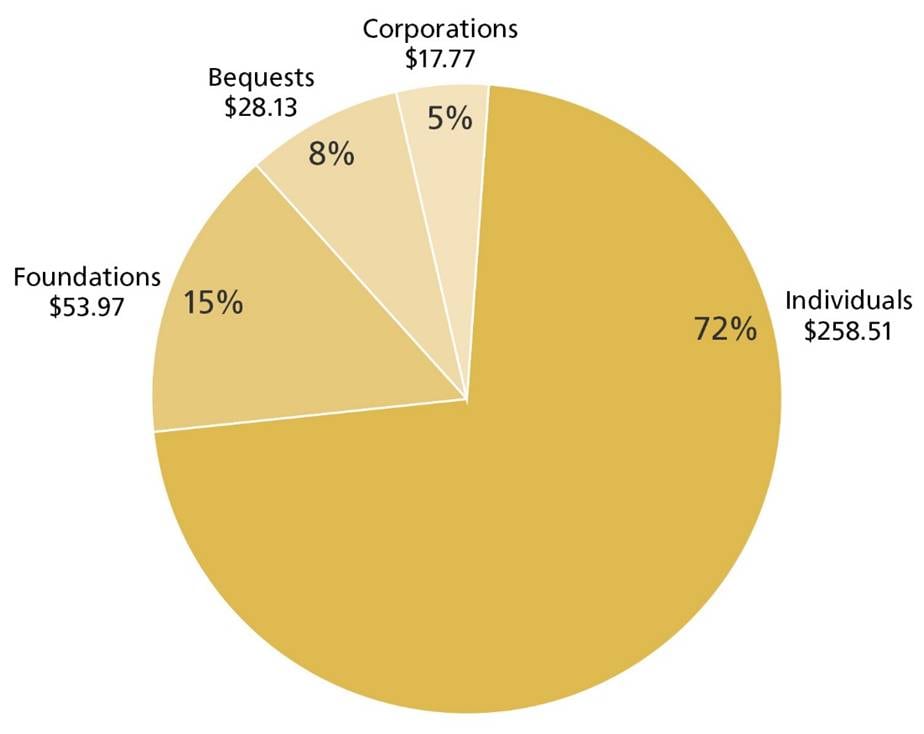 Individual giving, at $258.51 billion, increased 5.7 percent in current dollars (4.0 percent when inflation-adjusted) over 2013. The jump in individual giving made the greatest impact in source giving in 2014.

Bequest giving, at $28.13 billion, increased 15.5 percent (13.6 percent when inflation-adjusted) over 2013. These figures include two mega-bequests:  approximately $1 billion from Ralph C. Wilson, Jr. and more than $400 million from Rachel Lambert Mellon.

Corporate giving, at $17.77 billion, increased 13.7 percent (11.9 percent when inflation-adjusted) over 2013.  Corporate pre-tax profits are a significant factor in how much corporations give each year, and in 2014, giving by corporations was estimated to be 0.7 percent of corporate pre-tax profits – the lowest percentage recorded in the last 40 years, matching four other years during the mid-1970s.

“We saw several very large gifts greater than $200 million – a few were greater than $500 million and one was nearly $2 billion – in 2014,” said Patrick Rooney, Ph.D., associate dean for academic affairs and research at the Lilly Family School of Philanthropy and the presenter of Giving USA in Kansas City. “The majority of these mega-gifts were given by relatively young tech entrepreneurs.  These gifts are high-impact and are addressing many critical issues of our time, particularly medical research.”

2014 contributions: $358.38 billion by type of recipient organization (in billions of dollars – all figures are rounded) 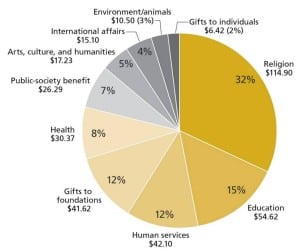 Eight of the nine categories of charities experienced growth over 2013.

Religion, at $114.90 billion, increased 2.5 percent in current dollars (holding flat at 0.9 percent when adjusted for inflation) and received the largest share of charitable dollars in 2014 at 32 percent of the total.

Education, at $54.62 billion, grew 4.9 percent over 2013 (3.2 percent when inflation-adjusted) and received the second-largest share of charitable dollars in 2014 at 15 percent of the total.

Human Services, at $42.10 billion, increased 3.6 percent over 2013 (1.9 percent when adjusted for inflation) and ranked third in total gifts received, at 12 percent of charitable dollars.

Foundations, at $41.62 billion, grew 1.8 percent (0.1 percent when adjusted for inflation) over 2013 and amounted to the fourth-largest share of charitable dollars in 2014, at 12 percent of the total (just behind Human Services.)

Public Society Benefit, at $26.29 billion, grew 5.1 percent (3.4 percent when adjusted for inflation) over 2013 and ranked sixth in total gifts received with 7.0 percent of the total.

Arts/Culture/Humanities, at $17.23 billion, increased 9.2 percent (7.4 percent when adjusted for inflation) over 2013 and received the seventh-largest proportion of total charitable dollars, with 5.0 percent of the total.

International Affairs, at $15.10 billion, decreased 2.0 percent (3.6 percent when adjusted for inflation) yet received the eighth-largest share of charitable dollars, with 4.0 percent of the total.

This is indicative of the changing landscape of American religion:  fewer Americans are identifying with a specific religion and people are giving more to organizations with religious values that match their own, instead of, or in addition to, congregations.

While it is still too early to tell if total giving will sustain above the pre-recession level, Dr. Rooney noted, “We are optimistic that giving will soon return to and exceed the high levels seen prior to the Great Recession across all categories analyzed in Giving USA.”

Enjoy a savings of 30% on all Giving USA 2015 products with code 3015GI. Visit the Giving USA store at http://givingusa.org/product-category/2015-products/.