By Heather EhlertJune 14, 2016July 18th, 2016All Posts, Commentary, Current Events/News, Fundraising, Giving USA, News You Can Use
No Comments

America’s Most Generous Year Ever
Giving from American individuals, foundations, estates and corporations sets a record for the second straight year

Americans donated an estimated $373.25 billion to charity in 2015, achieving an all-time high for the second year in a row.  This figure also represents a 4.1 percent growth in current dollars (4.0 percent when adjusted for inflation) over the revised estimate of $358.60 billion in current dollars ($359.04 billion in inflation-adjusted dollars) given in 2014. Total giving increased a combined 10.1 percent (in inflation-adjusted dollars) in 2014 and 2015 – the first time two-year combined total giving experienced double-digit growth since 2004-2005 (15.4 percent). 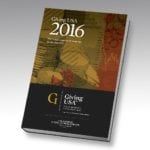 These findings are contained in Giving USA 2016: The Annual Report on Philanthropy for the Year 2015.  Giving USA is the longest-running and most comprehensive evaluation of philanthropic trends in the United States. Giving USA is published by the Giving USA Foundation and is researched and written by the Indiana University Lilly Family School of Philanthropy.

“Americans give one billion dollars a day, on average, to help others,” said Jeffrey D. Byrne, President + CEO of Jeffrey Byrne + Associates, Inc., “and charitable contributions are continuing to grow. This data is not only remarkable on its face, but also illustrates the generosity that Americans show year after year.” Byrne is also Board Chair of The Giving Institute, sister organization to the Giving USA Foundation, a public service and public trust dedicated to providing the highest-quality information about philanthropy.

This growth in giving is due, in large part, to the recovering economic environment and stabilization of household finances, particularly those at higher income levels.  While the S&P ended flat in 2015 (a -.7 percent change), there was growth in several other key economic indicators:  personal consumption – 3.4 percent, personal income – 4.4 percent, disposable personal income – 3.7 percent, corporate pre-tax profits – 3.3 percent and GDP – 3.5 percent.  Total giving in 2015 was 2.1 percent of GDP.  Giving as a percentage of GDP continues to hover around 2.0 percent as it has for the last five years.

“This growth in giving is a positive sign, and we see countless examples of the good work it has done.  Without question, we should celebrate our impact, but nonprofit fundraising must continue to evolve as philanthropy evolves. We are seeing a proliferation of non-traditional giving vehicles and donors increasingly seek evidence of the impact of their gifts. Nonprofits must initiate and maintain two-way dialogue with their donors – first, to listen and learn about the donor’s needs and aspirations and to then share a persuasive case for support and the variety of ways to give,” added Byrne.

In 2015, giving increased for all four donor (source) types. 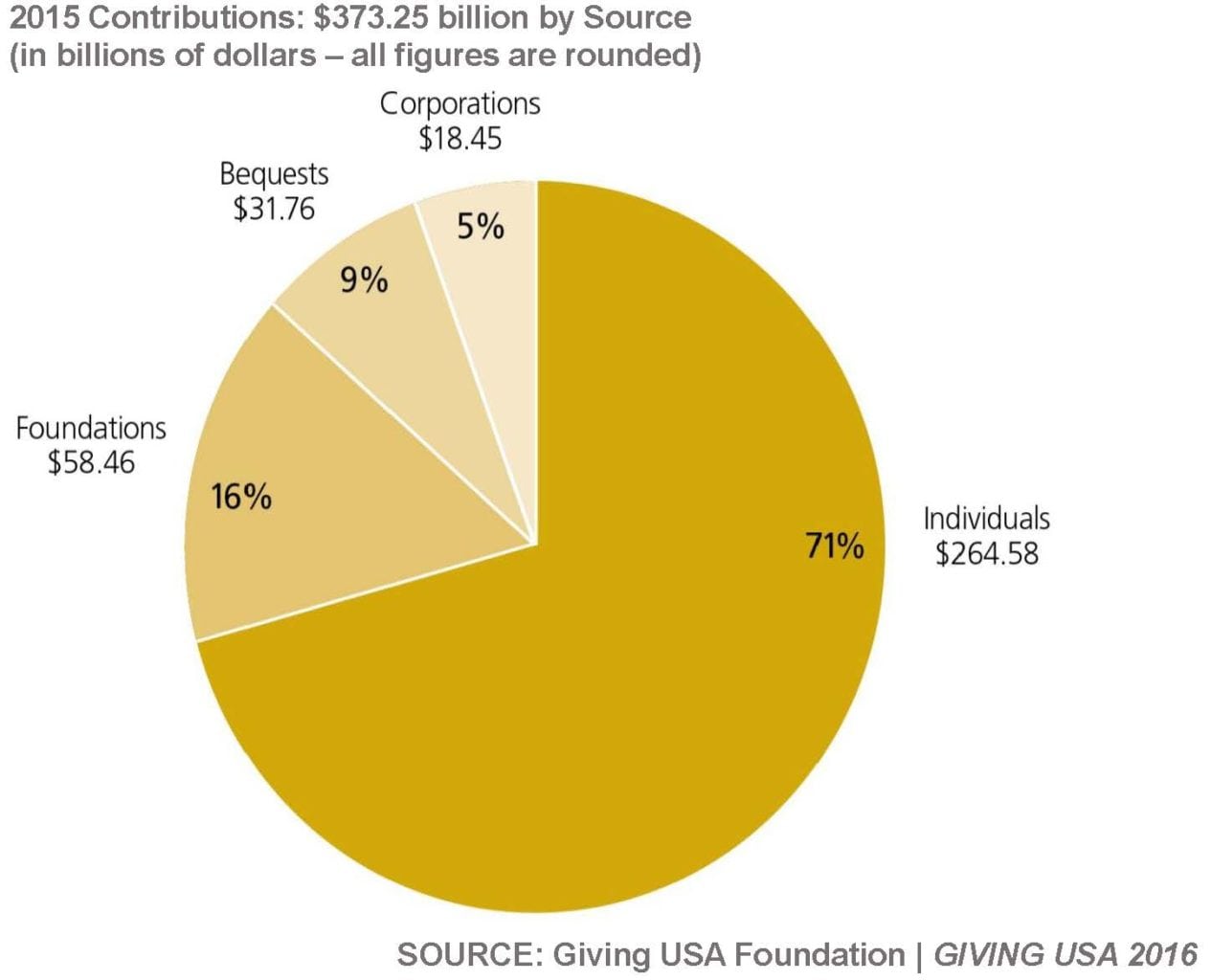 Individual giving, at $264.58 billion, increased 3.8 percent in current dollars (3.7 percent when inflation-adjusted) over 2014. Giving by individuals accounted for 71 percent – the largest share – of total giving in 2015.

Corporate giving, at $18.45 billion, increased 3.9 percent (3.8 percent when inflation-adjusted) over 2014.  This figure ties corporate giving for the year 2005 for its highest level ever. Giving by corporations accounted for 5.0 percent of total giving in 2015.

In 2015, giving increased to all but one recipient type. 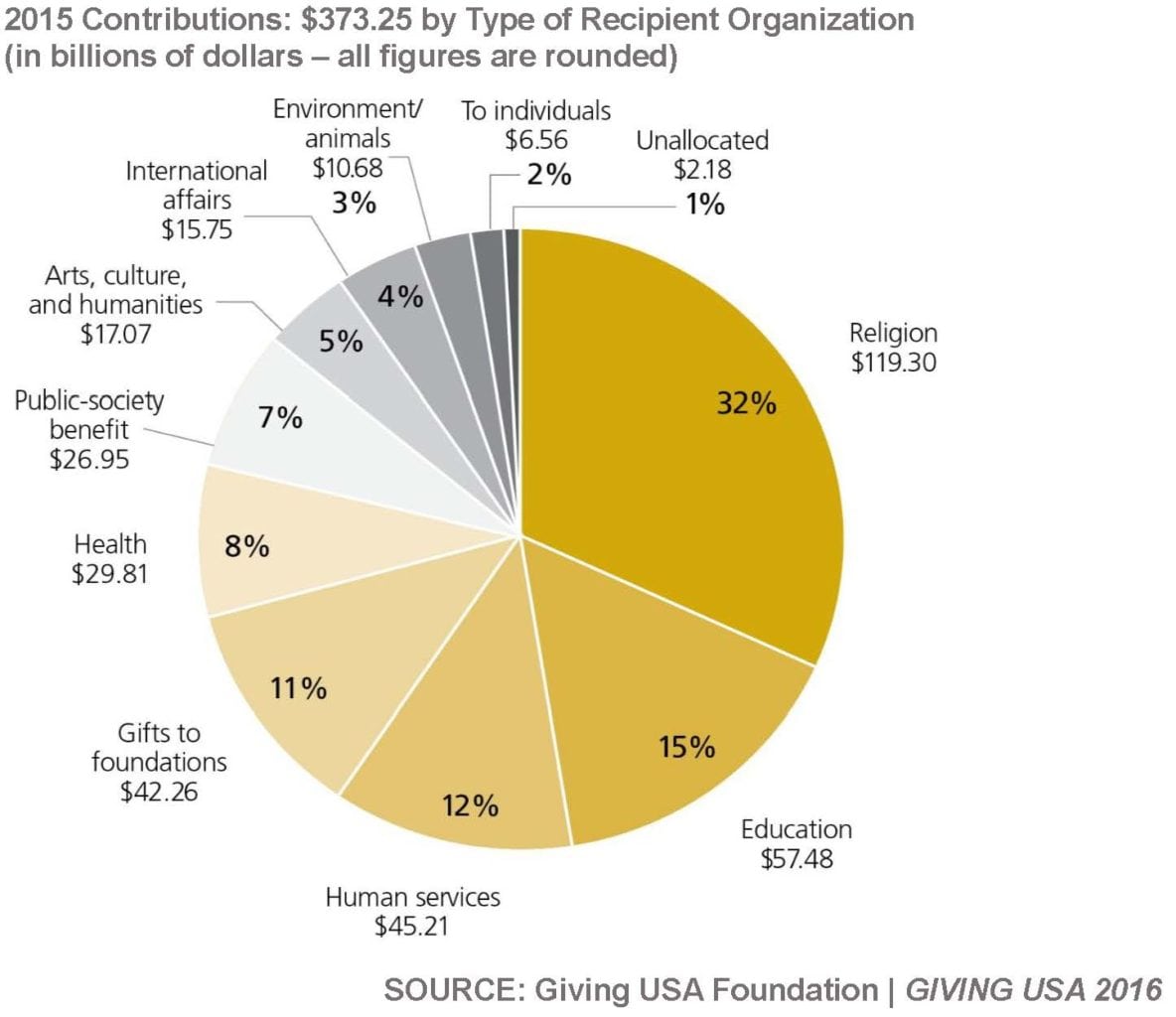 Religion, at $119.30 billion, received the largest share of total giving at 32 percent. Giving to religion increased 2.7 percent in current dollars, 2.6 percent when adjusted for inflation.

Education, at $57.48 billion, received the second-largest share of charitable dollars in 2015 at 15 percent of the total. Giving to education increased 8.9 percent over 2014 in current dollars, 8.8 percent when adjusted for inflation.

Foundations, at $42.26 billion, amounted to the fourth-largest share of charitable dollars in 2015, at 11 percent of the total, but experienced a 3.8 percent decline in current dollars from 2014, 4.0 percent when adjusted for inflation.

Health, at $29.81 billion, received the fifth-largest share at 8.0 percent of the total. Giving to health increased 1.3 percent in current dollars over 2014, 1.2 percent when adjusted for inflation.

Public Society Benefit, at $26.95 billion, ranked sixth in total gifts received with 7.0 percent of the total. Giving to public-society benefit increased 6.0 percent in current dollars over 2014, 5.9 percent when adjusted for inflation.

Arts/Culture/Humanities, at $17.07 billion, received the seventh-largest proportion of total charitable dollars, with 5.0 percent of the total. Giving to arts/culture/humanities grew 7.0 percent in 2015, 6.8 percent in inflation-adjusted dollars.

International Affairs, at $15.75 billion, received the eighth-largest share of charitable dollars, with 4.0 percent of the total. Giving to international affairs increased 17.5 percent over 2014, 17.4 percent when adjusted for inflation.

Environment/Animals, at $10.68 billion, ranked ninth in total gifts received, with 3.0 percent of the total. Giving to environment/animals rose 6.2 percent in current dollars, 6.1 percent when adjusted for inflation, over 2014.

“With an estimated 88 percent of total giving in 2015 coming from individuals, bequests and family foundations, it remains critically important to remember philanthropy is about establishing and growing relationships,” says Byrne.  “By forming long-lasting, mutually beneficial relationships, you create donors who have confidence in the integrity and ability of the fundraiser as well as confidence in the organization.”

For more information about the Giving USA Foundation click here.

For additional information, about The Giving Institute, click here.