By Heather EhlertJune 13, 2017August 17th, 2017All Posts, Annual Giving, Current Events/News, Fundraising, Giving USA, News You Can Use
No Comments

Giving by American Individuals, Foundations, Estates and Corporations Reaches a New High for the Third Straight Year
Giving by individuals drove the rise in total giving; all nine major philanthropy subsectors experienced giving increases–
for the sixth time in the last four decades

Jeffrey Byrne + Associates, Inc., U. S. Trust and Nonprofit Connect recently presented Giving USA 2017: The Annual Report on Philanthropy for the Year 2016 in Kansas City. Special guest Dr. Patrick Rooney, Associate Dean for Academic Affairs and Research and Professor of Economics and Philanthropic Studies at the Indiana University Lilly Family School of Philanthropy shared highlights from the report to a full house at the Ewing Marion Kauffman Foundation Conference Center.

Americans donated an estimated $390.05 billion to charity in 2016, achieving an all-time high for the third year in a row. This figure also represents a 2.7 percent growth in current dollars (1.4 percent when adjusted for inflation) over the revised estimate of $379.89 billion for total giving in 2015. Total giving cumulatively grew 6.8 percent between 2014 and 2016. 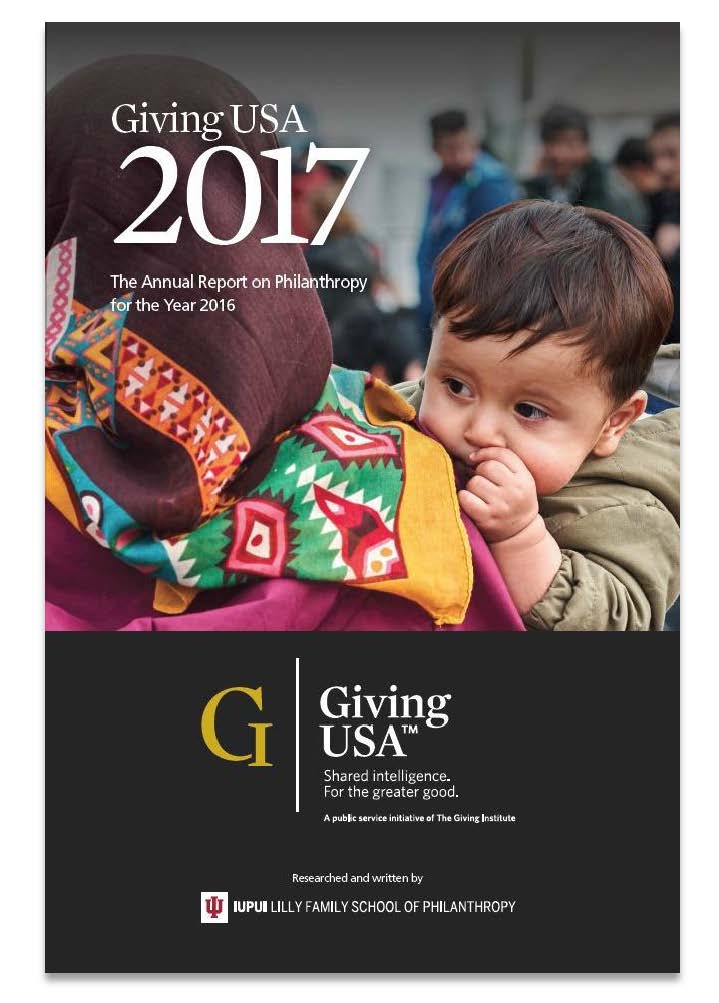 These findings are contained in Giving USA 2017: The Annual Report on Philanthropy for the Year 2016.  The seminal report on charitable giving, Giving USA is the longest-running and most comprehensive evaluation of philanthropic trends in the United States. Giving USA is published by the Giving USA Foundation and is researched and written by the Indiana University Lilly Family School of Philanthropy.

The single largest contributor to the increase in total charitable giving was an increase of $10.53 billion (3.9 percent over 2015) in giving by individuals. “Despite three quarters of stock market volatility in 2016 and a turbulent election season, individual giving continued its incredibly important role in American philanthropy,” said Jeffrey D. Byrne, President + CEO of Jeffrey Byrne + Associates, Inc. “In addition, this strong growth in individual giving appears to be less attributable to ‘mega gifts,’ which were not as robust as in previous years, suggesting more of that growth came from donors in the general population.” Byrne is also Board Chair of The Giving Institute, sister organization to the Giving USA Foundation, a public service and public trust dedicated to providing the highest-quality information about philanthropy.

Giving to all nine major categories of recipient organizations grew, making 2016 just the sixth time in the past 40 years that this has occurred:  religion, education, human services, giving to foundations, health, public-society benefit, arts/culture/humanities, international affairs and environment/animals. “This growth in every major sector illustrates the resilience of philanthropy and the diversity of donor motivation,” said Byrne. “It also reinforces the importance of getting to know our donors better.”

As has long been demonstrated, there continued to be a link between the economy and charitable giving trends in 2016. National-level economic indicators include personal consumption, disposable personal income and the Standard & Poor’s 500 Index – all of which are associated with households’ permanent and long-term financial stability and affect giving. In 2016, both personal consumption and disposable personal income grew by nearly 4.0 percent over 2015. The S&P 500 finished the year up 9.5 percent after uneven performance for much of 2016 and a mixed economic picture in 2015. Total giving as a percentage of Gross Domestic Product (GDP) continues to hover around 2.0 percent as it has for the last six years.

Be sure to check out Jeffrey Byrne’s Top Five Ways Nonprofits Can Use Giving USA.

The Numbers for 2016 Charitable Giving by Source
Three of the four sources that comprise total giving—individuals (72 percent of the total), corporations (5.0 percent) and foundations (15 percent)—increased their 2016 donations to America’s more than 1.2 million charities, according to the report. 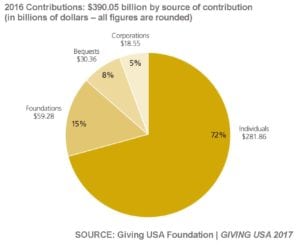 Giving by corporations is estimated to have increased by 3.5 percent (2.3 percent adjusted for inflation) in 2016, totaling $18.55 billion. Corporate giving increased modestly in 2016, in the wake of slower GDP growth and little movement in the share of pre-tax profits directed to giving.

Giving by bequest totaled an estimated $30.36 billion in 2016, declining 9.0 percent (10.1 percent adjusted for inflation) from 2015. Gifts from bequests frequently fluctuate from year to year and are less influenced by economic factors.

The Numbers for 2016 Gifts to Charitable Organizations
Giving USA’s research also examines what happens within nine different recipient categories of charities.  In 2016, giving increased to all subsectors, but there were deviations from patterns seen in recent years. Giving to education saw relatively slower growth than in previous years and giving to international affairs, humans services and public-society benefit organizations grew despite few widely publicized natural disasters, which often drive contributions to these types of organizations. Environment/animal organizations experienced the fastest rate of growth of the nine subsectors in 2016, at 7.2 percent. 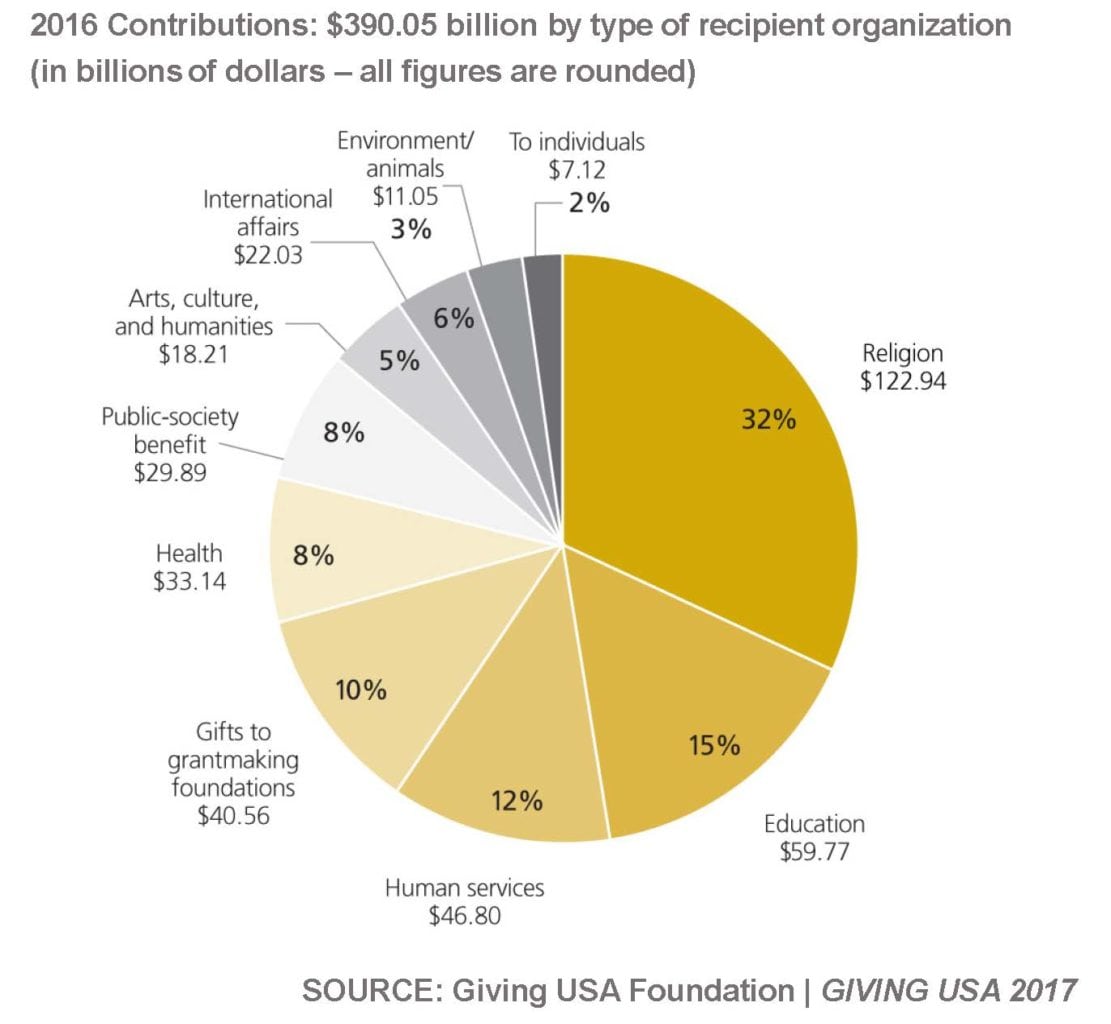 Giving to religion increased 3.0 percent (1.8 percent adjusted for inflation), with an estimated $122.94 billion in contributions.

Giving to education is estimated to have increased 3.6 percent (2.3 percent adjusted for inflation) to $59.77 billion.

Giving to foundations is estimated to have increased by 3.1 percent (1.8 percent adjusted for inflation), rising to $40.56 billion.

Giving to health organizations is estimated to have increased by 5.7 percent (4.4 percent adjusted for inflation), to $33.14 billion.

Giving to public-society benefit organizations increased by an estimated 3.7 percent (2.5 percent adjusted for inflation) to $29.89 billion.

Giving to arts, culture and humanities is estimated to have increased 6.4 percent (5.1 percent adjusted for inflation) to $18.21 billion.

Giving to international affairs is estimated to be $22.03 billion in 2016, an increase of 5.8 percent (4.6 percent adjusted for inflation).

Giving to environment and animal organizations is estimated to have increased 7.2 percent (5.8 percent adjusted for inflation) to $11.05 billion.

Giving to individuals is estimated to have declined 2.5 percent (3.7 percent in inflation-adjusted dollars) to $7.12 billion. The bulk of these donations are in-kind gifts of medications to patients in need, made through the Patient Assistance Programs (PAPs) of pharmaceutical companies’ operating foundations.

“As philanthropy is evolving, so are the tools and platforms through which people give,” says Byrne.  “As giving in America continues to reach new heights, I hope everyone can find ways to give that are meaningful for them, and feel confident that their giving is making a powerful difference and improving the way we all live.”

Explore Giving USA products and resources, including free highlights of each annual report at its online store at www.givingusa.org for more information.