By Heather EhlertNovember 17, 2016March 7th, 2018All Posts, Current Events/News, Donor Cultivation, Fundraising, News You Can Use
No Comments 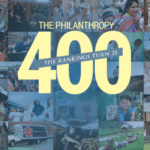 This year’s release of the Philanthropy 400 confirmed what many nonprofit professionals have suspected over the past few years – the way we give and the way we raise money is changing. In The Chronicle of Philanthropy’s annual ranking of nonprofits that raise the most from individuals, Fidelity Charitable Gift Fund claimed the number one spot collecting $4.6 billion in 2015. Fidelity Charitable Gift Fund is an arm of asset-management firm Fidelity Investments. In the 25 years since its launch, it has become one of the biggest grantmakers in the country awarding $3 billion to nonprofits in 2015. In the last year alone, Fidelity donors have recommended grants to over 106,000 charities, with over 220,000 nonprofits supported since its inception in 1991.

A year ago, as we celebrated our 15th anniversary of nonprofit fundraising success, JB+A hosted speakers Matt Nash, Senior Vice President of Marketing and Client Experience at Fidelity Charitable, and Debbie Wilkerson, President and CEO of the Greater Kansas City Community Foundation, in exploring the role of donor-advised funds in the powerful future of philanthropy.

Jeffrey, Matt and Debbie “unshrouded” some of the mystery surrounding donor-advised funds by explaining the dynamics of donor and fund relations, the benefits to donors who use donor-advised funds and the continued need for donor stewardship. (Check out the JB+A anniversary event here.)

Fidelity’s top standing in the annual ranking is significant:  it is the first time an organization that primarily raises money for donor-advised funds has held the top spot. It’s also worth noting United Way has consistently held the top spot and has been usurped only twice since the list started in 1991. This year, United Way saw a 4% drop in funds raised while Fidelity saw a 20% increase.  Fidelity credits its rise to the top to investments in technology, claiming its online platform has turned charitable giving into an easy digital transaction that allows for more transparency and easier record keeping.

But not everyone is celebrating this trend. Critics of donor-advised funds argue money can sit in these accounts for years, but could be used for critical causes now. Others say these funds look to the future by offering donors alternative ways to be charitable. Despite all the differing perspectives surrounding donor-advised funds, data shows they aren’t going anywhere and are quickly becoming an attractive option to the modern, busy donor.

The movement happening in local and federal government will affect what we do in daily practice. We need to carefully follow these happenings and advocate for policy that supports a culture of long-term giving.

By offering different mechanisms or vehicles for giving, we can encourage charitable giving and facilitate the process in a way that is comfortable for donors. We especially need to capitalize on new technologies that enable maximum giving potential such as the giving widget, which encourages giving on a nonprofit’s website through a donor-advised fund.

As donor-advised funds grow in popularity, we must remember that behind these giving vehicles, there are people. In fact, 92% of donor-advised funds are not anonymous, so we must engage these stakeholders by sharing stories of all the good works nonprofits do.