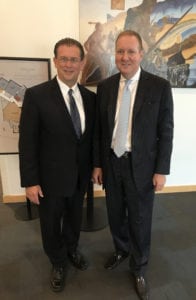 JB+A was proud to join U.S. Trust and Nonprofit Connect in hosting Giving USA 2017: The Annual Report on Philanthropy for the Year 2016 in Kansas City on June 16 at the Kauffman Foundation Conference Center.  2017 marked JB+A’s 12th year of bringing Giving USA to Kansas City, and this year’s report was presented by Dr. Patrick Rooney, Associate Dean for Academic Affairs and Research and Professor of Economics and Philanthropic Studies at Indiana University’s Lilly Family School of Philanthropy.

Here are some Key Takeaways from Dr. Rooney’s presentation of the Giving USA 2017 report:

Philanthropy and Politics
“More people donate each year than vote,” explained Dr. Rooney, “and the issues most spoken about in 2016 political dialogue were the recipients of the most giving: arts/culture/humanities, environment/animals, health and international affairs.”  Dr. Rooney stressed this may or may not be a “causal” relationship, but pointed out the correlation was hard to ignore. And we may see more clearly the true impact of this “politically-motivated” type of giving in 2017 data.

Giving by Foundations and the 5% Payout Rate
While giving by all three types of foundations – independent, operating and community – increased, the growth was more moderate in 2016.  “Giving by Foundations is more predictable, because of the 5% payout rate*,” said Dr. Rooney, “And independent foundations provided the majority of grantmaking in both 2015 and 2016.” This moderate rise in giving may be attributable to a two-year lagged effect from S&P 500 performance.

*Refers to the payout requirement that is the minimum amount private foundations must spend each year for charitable purposes. By law, private non-operating foundations must distribute five percent of the value of their net investment assets annually in the form of grants or eligible administrative expenses.

Public-Society Benefit and Donor-Advised Funds
Dr. Rooney recognized that “not everyone understands the composition of the Public-Society Benefit subsector.” Organizations within this category include those related to voter education, civil rights, civil liberties, consumer rights and community/economic development as well as free-standing research institutions (for the sciences and public policy.)  This subsector also includes organizations that raise funds to distribute to nonprofits, such as the United Way, Combined Federal Campaigns and Jewish Federations.

National donor-advised funds (such as Fidelity, Schwab and Vanguard) are also included in Public-Society Benefit, and Dr. Rooney noted we are seeing strong increases in contributions to these types of giving vehicles.  “For only the second time since The Chronicle of Philanthropy initiated the Philanthropy 400 in 1991, United Way Worldwide was not listed as the top charity,” explained Dr. Rooney. “Fidelity Charitable took the top spot. In 2015, contributions to Fidelity Charitable grew 20% over 2014, while United Way saw a 4% drop in charitable receipts.”

Dr. Rooney offered that being able to continue to disaggregate donor-advised funds data in this category will shed more light on this topic.

Individual Giving and its Share of the Pie
Individual giving has declined from 84% of total giving in the five-year period ending in 1981 to 72% of total giving in the five-year period ending in 2016.  But Dr. Rooney reassured us individuals/households are still giving, they’re just doing so in more formalized ways (such as through private foundations and donor-advised funds) and reminded us that the single largest contributor to the increase in total charitable giving in 2016 was the increase of $10.53 billion in giving by individuals. He also pointed out the “democratization of philanthropy in 2016,” explaining that “The strong growth in individual giving may be less attributable to the largest of the large gifts*, which were not as robust as we have seen in prior years – suggesting this growth may have come from donors among the general population.”

Dr. Rooney stressed the power to increase giving is in our hands: “If every American household reallocated $5 a day of frivolous consumption to philanthropy, that would double household giving overnight.”  Dr. Rooney added, “It’s up to us as donors, but also as nonprofits – we need to make the case for philanthropy.”

*Giving USA refers to very large gifts as “mega-gifts” and sets that threshold every year.  In 2016, gifts of $200 million and above were tracked as mega-gifts.

Be sure to check out Jeffrey Byrne’s Top Five Ways Nonprofits Can Use Giving USA to improve their fundraising and JB+A’s recap of Giving USA 2017  findings.

Download the two traditional pie charts illustrating 2016 source contributions and recipients and share with Board members, your CEO and development staff.