Editor’s Note:  If you live in the Greater Kansas City, Missouri region, please join Jeffrey Byrne + Associates, Inc., U. S. Trust and Nonprofit Connect on Friday, June 28, at the Ewing Marion Kauffman Foundation for a presentation on Giving USA 2013 and findings from High Net Worth Studies commissioned by U.S. Trust. Registration and coffee begin at 7:30 a.m.; the program begins at 8:30 a.m.)

The 3.5 percent year-over-year growth rate (1.5 percent adjusted for inflation) in gifts from American individuals (both households and bequests from their estates), corporations and foundations matches the same figurative portrait of 2012’s economic indicators – some trends were positive, others were negative, but overall, there was growth. Federal tax policy shifts likely also played a role in giving decisions made last year.

The findings are contained in the 58th consecutive edition of Giving USA, the seminal annual report on charitable giving in America. 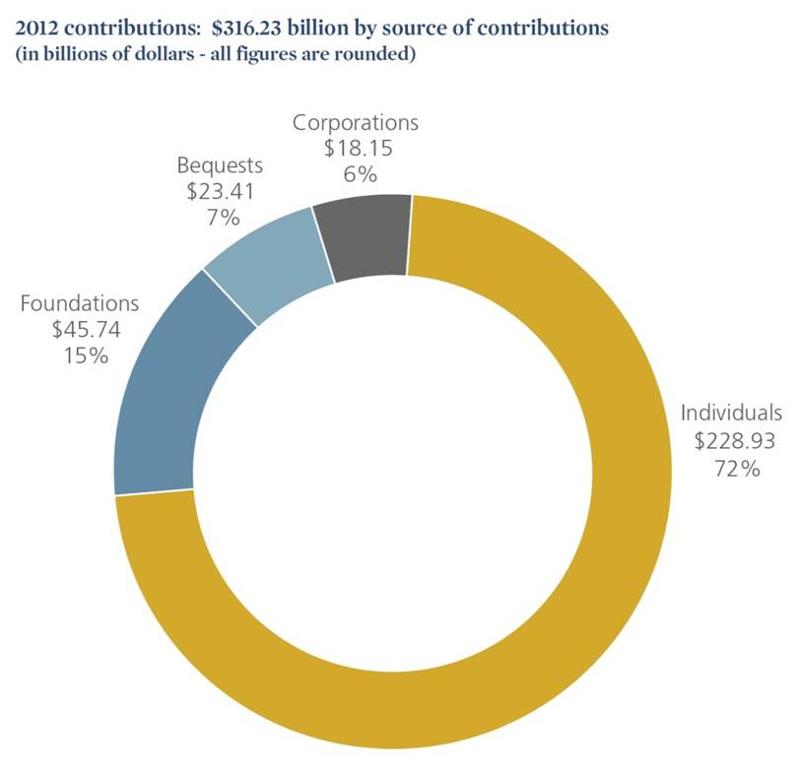 “Americans are feeling more positive about the economic future of the country, and thus their own pocketbooks. This is reflected in the continuing economic recovery that many household are achieving and thus steady growth in various financial indicators. Obviously, Americans felt relief around their personal and corporate circumstances last year, and were able to be more generous with their individual, foundation and corporate resources. This is a good sign that the economic recovery continues, and Americans are returning to charitable giving habits that were in place prior to the devastating crash of just a few years ago,” said Jeffrey Byrne, President + CEO of Jeffrey Byrne + Associates, Inc. and a Board member of the Giving Institute, which founded the Giving USA Foundation in 1985.

↑ Giving by individuals rose to $228.93 billion in 2012, an estimated 3.9 percent increase (1.9 percent adjusted for inflation). Income and wealth are key drivers of household giving, as is a sense of financial security. Giving by taxpayers who itemize their gifts represented 81 percent of the total donated by individuals in 2012.

↓ Giving by bequest decreased an estimated 7.0 percent in 2012 (8.9 percent adjusted for inflation) to $23.41 billion. Itemizing estates contributed 78 percent of the total, or $18.31 billion. Bequest giving tends to be volatile from year to year, as it is highly influenced by very large gifts from estates that closed during that year.

↑ Giving by corporations rose 12.2 percent in 2012 (9.9 percent adjusted for inflation), to an estimated $18.15 billion, including gifts from both corporations and their foundations. The two entities provide cash, in-kind donations and grants. Increasing the 2012 total was the estimated $131 million corporations gave to nonprofits working on relief efforts in the aftermath of Hurricane Sandy.

“While $316 billion is a record number these past few years, it is a far cry from the $344 billion given in 2007 by Americans. We are still in a recovery and Americans face real choices in their charitable giving decisions. It is, therefore, incumbent upon nonprofits to put out sophisticated and solid cases for support for charitable giving in front of donors,” Byrne added.

Beyond financial pressures, 2012 also saw policy changes considered at the federal level that could alter future giving, including proposals aimed at capping or eliminating the longstanding charitable tax deduction. The charitable tax deduction is an important element in charitable giving. In 2012, the American Taxpayer Relief Act preserved the deduction, but nonprofit leaders must be vigilant with their Members of Congress to continue to support this important tool that Americans rely upon for their charitable giving.

Nearly 50 years of data indicate that while the policy environment can have an impact on the timing and amount of charitable giving, especially from donors at higher income levels, the overall giving climate is primarily influenced by economic factors, which were mixed in 2012.

“As in the economy overall, some aspects of giving are growing more than others,” said Gene Tempel, Ed.D., CFRE, Founding Dean of the Indiana University Lilly Family School of Philanthropy. “For example, the 9.9 percent inflation-adjusted growth in corporate giving was driven by strong gains in corporations’ pre-tax profits, which marks a bright spot. In contrast, foundation giving grew by 2.3 percent after adjusting for inflation.” 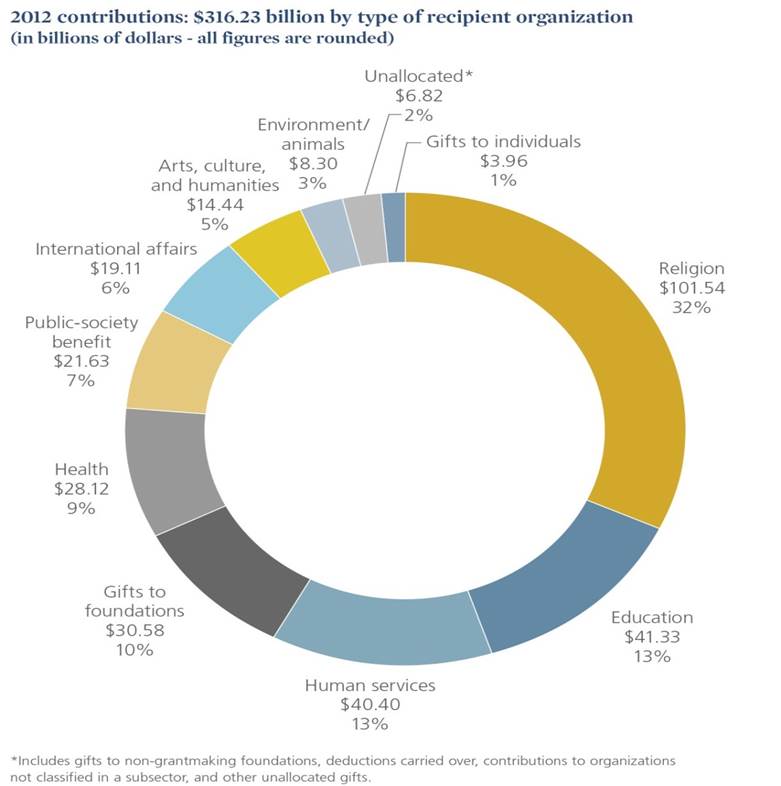 Topline Considerations from Giving USA 2013 about Recipients of Charitable Contributions:

(Flat) Giving to religion was virtually flat (a -0.2 percent decline) between 2011 and 2012, with contributions estimated to be $101.54 billion. Adjusted for inflation, giving to religion declined 2.2 percent. Religious organizations, comprised mostly of houses of worship, continue to receive the largest share of total U.S. charitable giving (32 percent) in 2012.

↑ Giving to education increased an estimated 7.0 percent between 2011 and 2012 (4.9 percent adjusted for inflation), to $41.33 billion. The bulk of donations in this category (upward of 75 percent) go to four-year colleges and universities.

↑ Giving to human services totaled $40.40 billion in 2012. This estimate is a 3.8 percent increase over 2011 (1.8 percent adjusted for inflation). It includes $223 million given to support organizations working on Hurricane Sandy relief and recovery efforts.

↓ Giving to foundations is estimated to have declined by 4.6 percent in 2012 (a decline of 6.5 percent adjusted for inflation), to $30.58 billion. Estimated contributions to foundations can change dramatically from year to year, depending upon very large gifts received from the wealthiest donors in America.

↑ Giving to health organizations increased an estimated 4.9 percent between 2011 and 2012 (2.8 percent adjusted for inflation), with $28.12 billion in total contributions.

(A note on entities defined as “public-society benefit”: This category is almost wholly comprised of entities that receive donations and then redistribute them to charitable organizations. Certain types of donor-advised funds are in this classification, as are well-known umbrella groups such as United Ways, the Combined Federal Campaign and Jewish Federations of North America.)

↑ Giving to international affairs was an estimated $19.11 billion in 2012, a 2.5 percent increase (flat when adjusted for inflation, at 0.4 percent growth).

↑ Giving to environmental and animal organizations saw an estimated 6.8 percent increase in 2012 (4.7 percent adjusted for inflation), to $8.30 billion.

↓ Giving to individuals decreased an estimated 6.8 percent in 2012 (a decline of 8.8 percent adjusted for inflation), to $3.96 billion. In large part, this category includes medications provided via Patient Assistance Programs administered by the operating foundations of pharmaceutical companies.

Unallocated giving totaled $6.82 billion in 2012, and includes itemized deductions by individuals and households they carried over from a previous year. “Carry-over” describes the difference between the tax year when a donor claims a gift on their return and the year when an organization receives a gift and reports it as revenue.

Unallocated giving also includes gifts to government entities — which do not report charitable contributions at the national level, gifts made to entities in other countries by foundations and gifts made to new organizations that have not yet been classified as to what type of charity they are. In addition, when a donor forms a charitable trust and takes a deduction, but does not tell the recipient organization, there is an unallocated amount.

For more information about Giving USA reports and how to access the Giving USA 2013 reports, visit www.givingusareports.org.