By jba-managerApril 30, 2015All Posts, Insights, News You Can Use
No Comments
News You Can Use Newsletter June 2014
Charitable Donations Grew Again in 2013
Fourth Straight Year of Gains
Contributions Reach $335.17 billion
from American Individuals, Estates, Foundations and Corporations
Editor’s Note:  If you live in the Greater Kansas City, Missouri area, please join Jeffrey Byrne + Associates, Inc., U. S. Trust and Nonprofit Connect this Thursday, June 19, at the Ewing Marion Kauffman Foundation Conference Center for a special presentation on Giving USA 2014 and findings from High Net Worth Studies commissioned by U.S. Trust. Registration and a light breakfast begin at 7:30 a.m.; the program begins at 7:55 a.m..)
As the economic factors associated with giving – the stock market, the GDP and personal income and consumption – improved in 2013, giving rose. Americans donated an estimated $335.17 billion to charitable causes in 2013, the fourth consecutive year of increases in giving, and this sustained increase in giving is good news, according to the Giving USA Foundation™ and its research partner, the Indiana University Lilly Family School of Philanthropy.
The 4.4 percent increase (3.0 percent adjusted for inflation) in gifts from American individuals (both households and bequests from their estates), foundations and corporations is a positive sign that giving is climbing back up to pre-recession levels.  The School predicts that if giving continues to grow at the current inflation-adjusted rate, averaging the last two years (4.2 percent), it will take just about one more year or so for total giving to return to the peak level realized in 2007 ($349.50 billion in inflation-adjusted dollars.)
These findings are contained in the 59th consecutive edition of Giving USA, the seminal annual report on charitable giving in America.

“Americans continue to philanthropically support their communities and the charities they value. Collectively, we are the most generous people on the face of the earth. 2013 was a banner year for giving as reflected in this overall report. As we continue to feel good about our economic circumstances, Americans will continue to give generously of their resources. The impact this has on the nonprofit sector is tremendous. Government cannot do it all. Good times have returned,” said Jeffrey Byrne, President + CEO of Jeffrey Byrne + Associates, Inc. and a Board member of the Giving Institute, which founded the Giving USA Foundation in 1985.
Key Takeaways from Giving USA 2014 about Donors:
Giving by individuals rose to $240.60 billion in 2013, an increase of 4.2 percent from 2012 (in current dollars). Adjusted for inflation, giving by individuals rose 2.7 percent in 2013. Giving by individuals accounted for 72 percent of total giving. Household income and assets are linked with charitable giving, as is individuals’ sense of financial security. As economic factors linked with household income and assets rise, so do contributions from individuals.  Itemized giving by taxpayers amounted to $199.17 billion, and non-itemized giving amounted to $41.16 billion in 2013.
Giving by bequest increased an estimated 8.7 percent in current dollars between 2012 and 2013, to $27.73 billion (7.2 percent adjusted for inflation).  The total amount for giving by bequest in 2013 includes two parts: 1) an estimated amount for charitable bequests from estates with assets of $1 million and above and 2) an estimated amount from estates with assets below $1 million.  For 2013, estimated bequest giving from estates $1 million and above totaled $21.17 billion, while estimated bequest giving from estates withassets below $1 million totaled $6.56 billion.
Giving by foundations increased 5.7 percent (4.2 percent adjusted for inflation) to an estimated $48.96 billion in 2013, according to figures provided by the Foundation Center. Giving by all three types of foundations are included in the estimate: independent foundations increased 4.8 percent, giving by operating foundations increased 6.6 percent and giving by community foundations grew 10.5 percent. Giving USA estimates that, on average, giving by family foundations comprises 63 percent of giving by independent foundations each year.  This amount was $23.36 billion – 48 percent of total giving by all foundations – in 2013.
Giving by corporations declined 1.9 percent from 2012 to 2013, totaling $17.88 billion. Adjusted for inflation, giving by corporations declined 3.2 percent in 2013. However, corporate foundation grant making grew 5 percent in 2013, to $5.73 billion. The 2013 estimate for giving by corporations includes $81 million in corporate contributions made to nonprofit organizations in support of disaster relief efforts. (Corporate giving includes cash and in-kind contributions made through corporate giving programs, as well as grants and gifts made by corporate foundations.)
“$335.17 billion in giving is a good sign that Americans are feeling generous and prosperous. Corporate giving is always reflective of pre-tax profits. However, we must continue to watch all the various sources that impact nonprofits, including government funding. Government funding continues to undergo significant changes and many organizations face limits on growth in program service fees. As Americans continue to have to make real decisions about allocating funds for their charitable giving, nonprofits must share even stronger and compelling cases for support for charitable giving with prospective donors,” Byrne added. 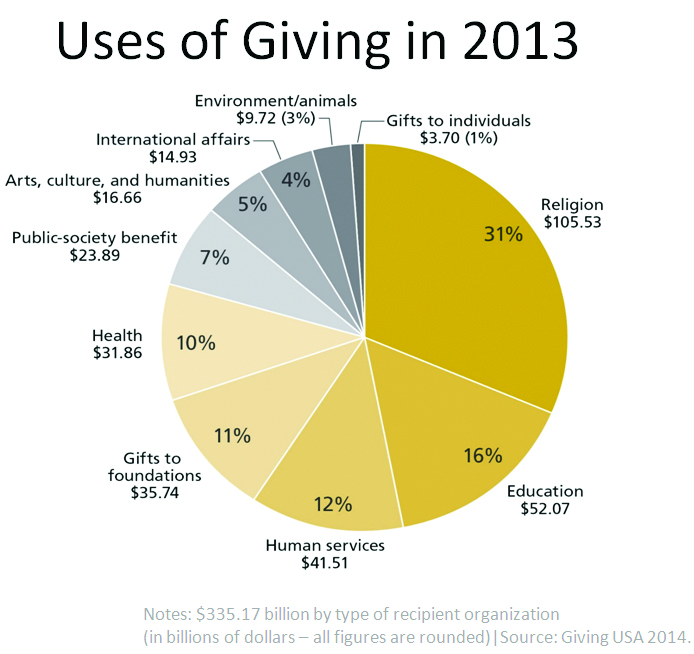