By jba-managerApril 30, 2015All Posts, Insights, News You Can Use
No Comments

Are You on the Menu or Are You at the Table?

Jeffrey Byrne + Associates is committed to sharing information that affects the nonprofit sector. We are a proud member of The Giving Institute, and as such, we also belong to the Charitable Giving Coalition. Formed in 2009, the Coalition is dedicated to preserving the charitable tax deduction, which is crucial to ensuring our nation’s charities receive the funds necessary to fulfill their essential philanthropic missions.

Firm President + CEO Jeffrey Byrne currently serves as The Giving Institute’s representative to the Charitable Giving Coalition. Stay tuned during 2015 for updates and ways you can become part of positive action to ensure the charitable deduction and other tax provisions retain their positive impact in supporting essential community services. 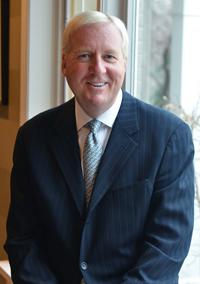 The debate over tax reform will continue into 2015.  While there are several areas with the potential to affect charitable giving, I would like to focus on two that will have immediate positive impact on philanthropy:  saving the charitable giving deduction and  making permanent the IRA rollover.

First, a little background on the charitable giving deduction. Congress enacted the charitable giving deduction in 1917, four years after instituting the federal income tax.  Many changes to the framework of this deduction have taken place over the past 98 years, but the deduction has not been in jeopardy of elimination until late 2012, when politicians began talking in earnest about lowering or even eliminating the deduction to reduce the federal deficit and avert the year-end “fiscal cliff.”

But nonprofits counter that the charitable deduction is a vital and unique incentive.  According to Giving USA, those who itemized their charitable contributions made up more than 80 percent of the total estimate (more than $230 billion) for giving by individuals in 2012.  For every $1 a donor can deduct, the public receives approximately $3 of benefit. No other tax provision generates that kind of positive public impact. Proponents of preserving the deduction feel very strongly that the government cannot and will not find a better way to leverage private investment in nonprofit and worthy causes.

According to the Charitable Giving Coalition, nonprofits generate $1.1 trillion every year in the form of jobs and services and account for more than 5 percent of the GDP. One in 10 U.S. workers are employed by the nonprofit sector, which provides 13.7 million jobs. Employees of nonprofit organizations received roughly 9 percent of wages paid in the U.S., and the nonprofit sector paid $587.7 billion in wages and benefits. Research reveals the “ripple effect” of foundation grantmaking supports millions of jobs and billions of dollars in economic growth that extend for generations.

Research also indicates individuals feel strongly about the charitable giving deduction as well.  According to the United Way, 79 percent believe reducing or eliminating the charitable tax deduction would have a negative impact on charities and the people they serve. Sixty-two percent indicate they would have to reduce their contributions by a significant amount – by 25 percent or more if the deduction were reduced or eliminated. Two out of every three Americans (67 percent) are opposed to reducing the charitable tax deduction.

The IRA Charitable Rollover, enacted in 2006 in the Pension Protection Act, encourages older Americans to give out of their Individual Retirement Accounts.  IRA owners age 70½ or older can donate up to $100,000 to charitable organizations directly from their IRA, without treating the distribution as taxable income. The gift from an individual IRA counts toward the annual Required Minimum Distribution (RMD) and aids donors in avoiding and reducing taxes.

Since its passage, the rollover provision has proven to be very popular with taxpayers and beneficial to charities. But because the provision was only temporary, the IRA rollover provision must be extended regularly or it will cease to exist as an option for donors. This uncertainty makes it difficult for donors and recipient charities.

The provision is part of a package of 55 temporary tax extenders that were reinstated retroactively for only the 2014 tax year, but expired again on January 1, 2015. Making the rollover permanent is important to donors who donate a portion of their IRA distribution each year – and to recipient nonprofits.

Elected officials from both sides of the aisle understand and appreciate the invaluable services nonprofits provide. While our government leaders are faced with incredibly difficult decisions regarding fiscal policy, this new year is the time to break the cycle of debate and make permanent the charitable deduction and create a permanent tax incentive to allow older Americans to include the IRA Charitable Rollover in their year-round giving plans.

It is our responsibility as leaders in philanthropy to participate and actively engage with our elected officials regarding these critical issues.  Our elected officials need our active involvement and expertise in helping them maneuver through the maze of policy options.

Recently, Senate working groups have invited input regarding tax reform:  “Individuals, businesses, organizations, and advocacy groups” are now able to send comments to one or more of the Senate Finance Committee’s five tax reform working groups. The groups will accept public comments through April 15, with plans to present a final report to Chairman Orrin Hatch (R-UT) and Ranking Member (D-OR) by the end of May.

To learn more about the Charitable Giving Coalition and how you can take action to preserve the charitable giving deduction, visit http://protectgiving.org/.

For more information on reinstating and permanently extending the IRA rollover, visit https://www.independentsector.org/ira_rollover.

Does your organization have all the tools it needs to achieve fundraising success?

Your annual fund, special events and corporate sponsorships may be strong,

but what about major and planned gifts?

Planned Gifts: More than Just a Pleasant Surprise – May 1

Registration and Networking 8:00 am

Don’t miss out on the best practices and progressive techniques for creating and implementing major gift and planned gift strategies that will transform your organization.

Register for both workshops and receive a complimentary copy of Read This…When I am Dead by Kansas City’s own Annie Presley and Christy Howard. Annie Presley will be part of a special panel for the May 1 Planned Gifts Workshop.

Register for both workshops by clicking here. ($149)

Register for Mastering Major Gifts on April 17 by clicking here. ($99)

Register for Planned Gifts: More than Just a Pleasant Surprise on May 1 by clicking here. ($99)

A Generational Gap in Giving: What is a Fundraiser to Do?

We’ve known for many years that different generations think and give differently, but a 2014 study provides a rather interesting perspective. The Wall Street Journal recently summarized a Harris Poll of 2,306 adults last July, showing 91% of Americans have made some sort of contribution within the past two to three years. This does not come as a surprise.

Perhaps WHAT Americans give is worth a second look. According to the Harris Poll, the top types of giving are:

Millennials (29%) believe people have a personal responsibility to make the world a better place by being involved with various issues and causes. Only 22% of Gen Xers felt this way, with 24% of Baby Boomers and 24% of Matures responding as such. While young adults appear to be slightly more idealistic, they indicated the strongest response of uncertainty when asked about social responsibility: 8% of Millennials but only 1% of older adults were “not sure” about their personal roles in community, civic and social issues.

Also interesting is the feedback provided about where charities should focus their efforts. Older adults are twice as likely (13%) as younger adults (6%) in wanting charities to focus their efforts on disaster relief. Twice as many younger adults (10%) as older adults (4%) surveyed feel global health should be a priority. All four of the age groups surveyed (Millennials, Gen Xers, Baby Boomers and Matures) responded equally about Human Rights, with approximately one in ten feeling this area should be a priority. Older adults also feel more strongly about medical research (18%) than younger adults (8%).

Most importantly for nonprofits, how can we use this information to improve our fundraising?

If you would like to discuss additional ways in which you can use data to improve your fundraising, or to explore how the “generational gap” is affecting philanthropy, please contact me at jkeller@jba.flywheelsites.com or at 785.766.6708.