By Suzanne DickenJune 16, 2020All Posts, Current Events/News, Giving USA, News You Can Use, The Giving Institute
No Comments

Giving USA 2020: The Annual Report on Philanthropy for the Year 2019 reports that Americans gave $449.64 billion to charity in one of the highest years for giving on record

Editor’s Note:
Please join Byrne Pelofsky + Associates, LLC, Bank of America and Nonprofit Connect for 15 Years of presenting Giving USA to Kansas City. This special presentation of Giving USA 2020: The Annual Report on Philanthropy for the Year 2019 will be held on Friday, June 19, via webinar. It will be followed by a forward-thinking panel discussion with local nonprofit leaders and funders. We will examine the future of philanthropy in light of recent events.  The program will begin at 10:00 a.m. Register here. 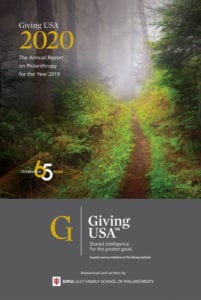 American individuals, bequests, foundations and corporations gave an estimated $449.64 billion to U.S. charities in 2019, according to Giving USA 2020: The Annual Report on Philanthropy for the Year 2019. This places 2019 among the highest years ever for charitable giving. Total charitable giving rose 4.2% measured in current dollars over a total of $431.43 billion contributed in 2018. Adjusted for inflation, total giving increased by 2.4% (Please see below for a more detailed breakdown of the numbers for each philanthropic source and sector.)

“This is the fourth year in a row that giving in America has exceeded $400 billion,” says Jeffrey Byrne, Co-Founder and CEO of Byrne Pelofsky + Associates. “This information is coming at a critical time in the evolution of philanthropy as we continue to weather an ongoing pandemic, global protests against police violence, calls for major structural change and an upcoming presidential election. I am excited to examine where we have been so we can talk about where we are going.”

Contributions from individuals, foundations and corporations all had strong growth in 2019, while giving by bequest stayed flat with a growth rate of 0.2%.

The Numbers for 2019 Charitable Giving by Source:

Giving by foundations increased 2.5%, to an estimated $75.69 billion in 2019 (a flat growth of 0.7% adjusted for inflation). Data on foundation giving are provided by Candid.

Highlights about Charitable Giving by Source:

It is important to note that for two years, individual giving has accounted for less than 70% of total giving. This is striking because individuals accounted for closer to 85% of total giving in the 1980s. The data shows that the number of major gifts are down, but the size of the gifts are going up. This could be due to growing income inequality revealing that philanthropy is mostly driven by high net worth individuals.

The Numbers for 2019 Charitable Giving to Recipients:

Giving to religion increased by 2.3% with an estimated $128.17 billion in contributions (growth of 0.5% adjusted for inflation).

Giving to human services increased by an estimated 5.0% (an increase of 3.1% adjusted for inflation), totaling $55.99 billion.

Giving to foundations is estimated to have increased by 2.5% (growth of 0.6% adjusted for inflation) to $53.51 billion, based on data provided by Candid.

Giving to health organizations is estimated to have increased by 6.8% (an increase of 4.9% adjusted for inflation) at $41.46 billion.

Giving to public-society benefit organizations increased by an estimated 13.1% (increase of 11.1% adjusted for inflation), to $37.16 billion.

Giving to arts, culture, and humanities is estimated to have increased by 12.6% (increased 10.6% adjusted for inflation) to $21.64 billion.

Giving to international affairs is estimated to have stayed relatively flat with a decline of 0.4% (declined 2.2% adjusted for inflation), to $28.89 billion.

Giving to environment and animal organizations is estimated to have increased 11.3% to $14.16 billion (increase of 9.4% adjusted for inflation).

Highlights about 2019 Giving to Charitable Organizations:

“The 2019 report is being released at an uncertain time in our economy, but now is not the time to panic,” says Byrne. “While we can’t say for certain that giving during this current recession will reflect the previous recessions of the last 20 years, the 2019 data does tell us that Americans are generous and have shown tremendous support for the nonprofit sector. Now is the time to continue to monitor factors that influence charitable giving, educate Board members and stakeholders about the broad context of philanthropic giving and create sustainable relationships with your donors. It’s up to nonprofits to listen to their donors and prospective donors – and be nimble in adjusting strategies to match their needs and expectations.”

Giving USA, the longest-running and most comprehensive report of its kind in America, is published by Giving USA Foundation, a public service initiative of The Giving Institute. It is researched and written by the Indiana University Lilly Family School of Philanthropy at IUPUI.

Download a copy of the pie charts for the sources and recipients of giving by Clicking Here.