Perspectives on Philanthropy in 2013

As I reflect upon 2013 and the great and numerous events that happened, three things really resonated with me in regards to our professions in the nonprofit world.

First, giving hit an all-time high as reported in Giving USA 2013. Second, a consortium of leaders of information on nonprofits came together to encourage dialogue around the need to re-think the way we evaluate nonprofit overhead. Third, the study of philanthropy took a great leap forward with the launching of a school of higher education dedicated to this field at the nation’s leading academic institution of philanthropic and nonprofit education.

These certainly aren’t the only or main stories for 2013. However, they reflect a cross section of commentary about the sector we all love. As you end this year, I hope you reflect on the positives and plan for an even brighter 2014.

1. Giving in the United States topped a new high in 2012.  The Giving USA Foundation and the Indiana University Lilly School of Philanthropy reported that Americans gave more than $316 billion to charitable causes. This giving came from individuals (72%), bequests (7%), foundations (15%) and corporations (6%). A closer look shows that each area of giving increased in 2012, with the exception of bequests. (Bequest giving is always volatile, depending upon the very large gifts from estates that close during that year.) Americans continue to be the most generous people on the face of the earth.  And within the sector recipient categories, nonprofit giving went up in almost every recipient group. 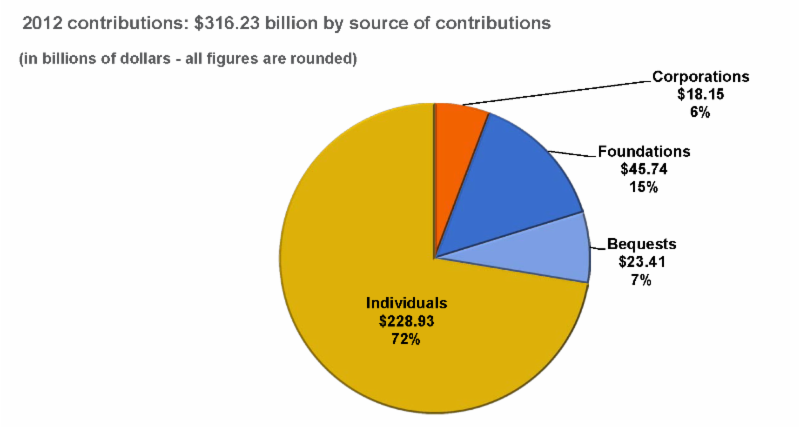 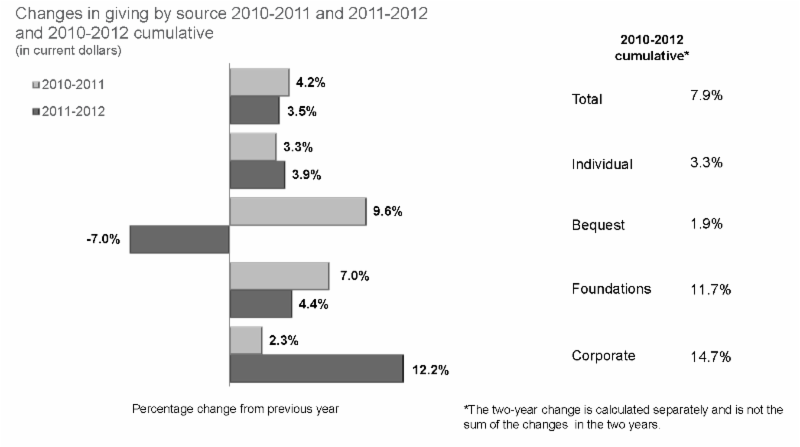 In June 2013, during the Giving USA 2013 presentation in Kansas City, Dr. Patrick Rooney (referenced below) pointed out “total giving as a percent of GDP has remained at two percent, plus or minus, for the last 50 years.  Yet, if every American household reallocated $5 a day of frivolous consumption to philanthropy, that would double household giving overnight.”

2. In a speech viewed more than 2,500,000 times, Dan Pollatta’s TED March 2013 talk challenged America’s leaders in the nonprofit and funding sectors to think differently about the cost of doing business for nonprofits. (TED is a nonprofit devoted to Ideas Worth Spreading. TED stands for Technology, Entertainment, Design – three broad subject areas that are, collectively, shaping our future. Today, TED is broader still, showcasing ideas that matter in any discipline.) Dan feels “there is no greater injustice than the double standard that exists between the for-profit and nonprofit sectors. One gets to feast on marketing, risk-taking, capital and financial incentive, the other is sentenced to begging.” View Dan’s inspiring TED speech by clicking here.

Dan’s sentiments are echoed in the movement known as “The Overhead Myth” initiated in 2013 by the leaders of the BBB Wise Giving Alliance, GuideStar and Charity Navigator.  Visit the Overhead Myth website here. These CEOs began the initiative to help donors make better decisions about their giving, by eradicating what they believe is a common misconception that, on its own, “overhead” is a valid and appropriate way to evaluate a nonprofit. In a historic move, these leaders penned an open letter to the donors of America, denouncing the “overhead ratio” as the only valid indicator of nonprofit performance and encouraging donors to consider the whole picture. The letter launched a campaign to “End the Overhead Myth” and help support nonprofits to invest in their mission, sustainability and success. Dr. Gene Tempel, Dean of the Indiana University Lilly Family School of Philanthropy (referenced below) penned an open letter supporting the movement. You can view Dr. Tempel’s letter here.

Indiana University is credited with founding the field of philanthropic studies and established the nation’s first bachelor’s, master’s and Ph.D. degrees in that field through the School’s predecessor, the Center on Philanthropy at Indiana University. The new Lilly Family School of Philanthropy serves as the preeminent educational resource and research body for philanthropic thinking around nonprofit management and fundraising. Dr. Gene Tempel serves as the Dean for the School and Patrick Rooney, Ph.D., serves as the Associate Dean. The School’s vision is to build an engaged world through giving and voluntary action for the public good.

On behalf of all of us at Jeffrey Byrne + Associates,